Ancient Greeks had no word for cupboard love, but, undoubtedly, this is a love the vast majority of animal pets may feel for us. The pet frog or snake that readies itself from its slumber when the humans appear with food. The fish that swarm to the top of a tank at feeding time. Even invertebrates such as stick insects and hissing cockroaches might approach something like this form of love. And you really could argue that it’s a kind of love – something close to philia, a loyalty or a dependable friendship, with the emphasis on food dependability. Sure, it’s not a love that inspires sonnets, but it’s something.

A desperately depressed part of me wonders if Dustin loved only himself – that he exhibited philautia. That his each and every day was consumed with where best to hide, how best to be fed and how best to maintain the status quo of survival. This is the ultimate slap in the face for self-obsessed human carers like me, and so considering Dustin in this way naturally saddens me. But then I remember something wonderful. Rare moments of … something else.

Every few months, when he thought we were fast asleep, a very different Dustin would show himself to us – but he would only emerge in the darkest of night. Dustin would sit on the end of the bed and he would watch me sleep. As I lay on my front, he would wait a few minutes before making a stealthy approach and he would begin to pummel his paws against my ribs. A deep purr would emanate from his broad body. This choking purr moved my bones as I held my eyes closed. Minute after minute, he would go on like this, purring and pummelling, and then he would change position. He would lie down and rest his chin in the cleft between my shoulder blades and stretch his paws over my shoulders as if cuddling me. 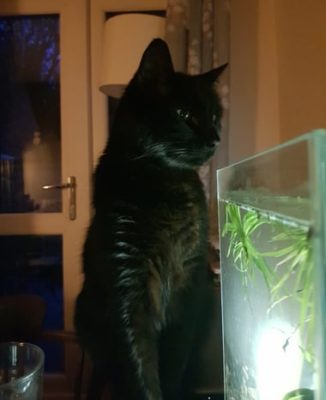 I would lie there motionless, eager not to ruin these rare and magical moments, breathing in the rhythmic vibrations of his deep purrs. Sometimes, a long, sinuous blob of gelatinous pleasure-drool would roll down my neck. I didn’t care. I wore it as a badge of honour. But then it would end. After about 20 minutes, the spell would lift. Dustin would run out of the door, apparently disgusted with himself for exposing his emotion so wantonly. I don’t think the ancient Greeks had a word for a love like that. A love like that is hard to pin down, hard to put into words. You know it when it happens, that is as close as I can get to putting it into a sentence.

And so, you loved like you lived, dearest Dustin. Cautiously. Yours was a careful love, but a real and vivid love, nonetheless – a love on a spectrum of incredible ways in which humans engage with other animals on planet Earth and, in fleeting moments or in lifelong infatuation, they engage back.