Unfortunately, in my experience many cats are destined to become overweight the moment they’re adopted.

A rescue cat is taken home and, because they were previously homeless or living in a tumultuous situation, it’s deemed okay to lavish them with treats and top up their food bowl once they’ve scarfed their adorable little face full.

“She had a bad life before. I just want her to be happy. I know she’s put on a little bit of weight but she deserves it,” is a refrain that’s said too often. 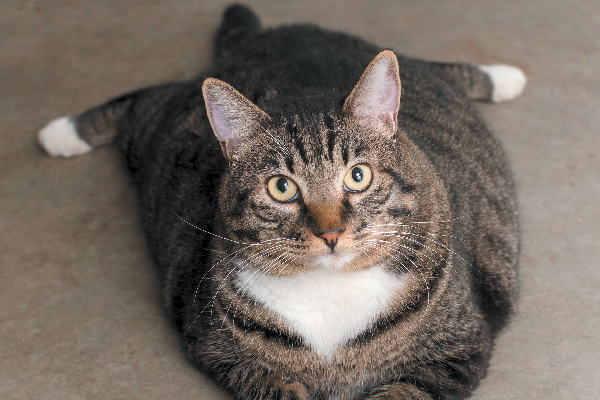 This predicament is exacerbated in the event of indoor cats. I’m a strong advocate that, at least in large cities, cats should be safely behind window panes and closed doors.

But while felines are independent, low-maintenance pets in a sense, you as your cat’s guardian have a duty to ensure they stay active and interested in the enclosed world around them.

Sure, sometimes after a long day, the idea of trying to entice the cat into a play session can seem exhausting, but too much food and zero exercise is a bad combination.

Instead, what seems to often happen is a newly adopted cat keeps putting on a touch too much weight for numerous months or perhaps a year or so. And once a cat is overweight, it’s harder than you think to re-vamp their menu and eating habits.

After all, we all know that cats are inherently finicky creatures.

I use affiliate links